My notes on: Job Bouwman's answer to "What is the toughest question ever asked in any interview?"

A while back, this answer by Job Bouwman appeared in my Quora digest and I enjoyed reading it (Thank you Job!) so much that I intended to blog about some of the more tricky parts of the answer where I thought some explanations got skipped over.

altitude to the hypotenuse equal to 6

I interpreted this as the height of the triangle. In otherwords, a triangle like this: 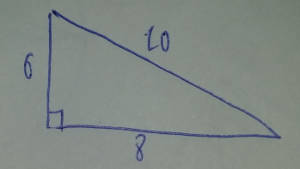 Let’s clarify what altitude to the hypotenuse means.

Based on the Wikpedia entry on the Altitude of a triangle:

In geometry, an altitude of a triangle is the line segment through a vertex and perpendicular to (ie. forming a right angle with) a line containing the base (the opposite side of the triangle). 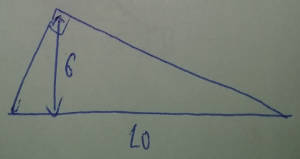 But we are told that such a triangle cannot exist. Why? By looking at:

A google search on “triangle with hypotenuse being diameter of circle always right angle” yields the following Wikipedia page on Thale’s theorem as the first result, which is exactly what we hoped is true (Google is just amazing). I highly recommend you read the proofs of Thales theorem on the Wiki page - it’s a pretty insightful read, although I can’t see how to extend the second proof to non unit circles.

With that, the situation seems hopeless. A right angle triangle with hypotenuse \( 10 \) simply cannot have an altitude to the hypotenuse greater than \( 5 \).

However, Mathematics and human ingenuity often surprises us. This is no exception. So far we’ve only been considering Euclidean geometry. Let’s step into the 3D realm (this is the hard part of coming up with the answer; I also cannot explain how people come up with these insights).

Big thanks to by Job Bouwman for his answer. The relevant images on Quora belongs to Quora and Job Bouwman.

Disclaimer: Opinions expressed on this blog are solely my own and do not express the views or opinions of my employer(s), past or present.